For over four decades Powder Blues has been Canada’s leading blues band. The mix of swing, blues, jazz, rock & roll, and r & b has an appeal so wide that people from seven to seventy swing side by side at a Powder Blues concert. Over the years the band has toured non-stop through Canada, the United States and overseas, spreading feel-good music that makes people dance and shout.
Powder Blues debut album, ‘Uncut’, was ignored by major labels who said there was ‘no market for the blues’. Undiscouraged, the band sold it off stage and sent it to radio stations whose switchboards lit up with calls asking, ‘who’s that?’ After selling 30,000 copies in a few weeks, the same record labels competed to distribute this ‘non-commercial’ product. To date, Powder Blues have sold over a million records worldwide.
Band highlights include winning Canada’s Juno, headlining the world-famous Montreux Jazz Festival in Switzerland, winning the Blues Foundation Award in Memphis, Tennessee and touring the US and Europe with legends like Willie Dixon, John Lee Hooker, B.B. King, James Brown, Albert Collins, James Cotton, and Stevie Ray Vaughn.
Leader, Tom Lavin has written many of the band’s best-known songs including ‘Doin’ It Right’ (‘On the Wrong Side of Town’) and ‘Boppin With the Blues’. Born in Chicago where he worked with local bands and blues legends, Tom moved to Vancouver gigging in the downtown nightclub scene. This led to work as a studio musician, songwriter, bandleader, record producer, and film composer.
Tom has won BCMIA awards for ‘Guitarist, Singer, Songwriter and Producer of the Year’, a Juno award for ‘Best New Band’ and the American W.C. Handy award. He has over a dozen gold, and platinum records for Powder Blues, Prism, April Wine, Long John Baldry, Amos Garrett, and many others.
2020 is the band’s 42nd Anniversary. Their more than dozen CD titles and DVD continue to sell worldwide making Tom Lavin & the Legendary Powder Blues one of Canada’s longest-standing musical ambassadors.


Order the live stream which is starting February 22nd @ 7 PM PST only on the following link: https://www.bluefrogstudios.ca/live-streams.html 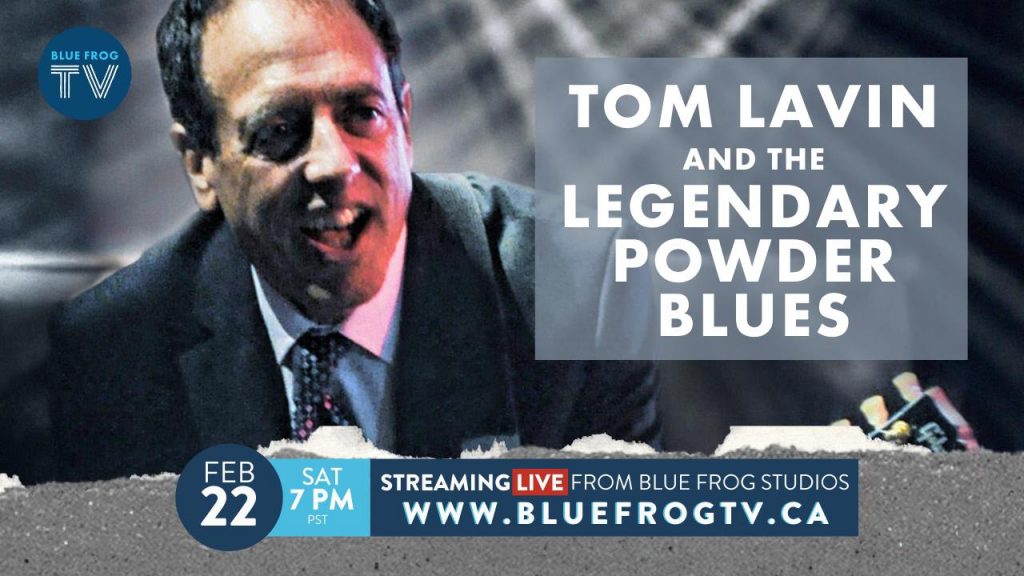