A brilliant title fight, three super prospects, and a K1 explosion! Jhreau Shepherd and Quinten de Vreught meet for the welterweight title in a mouth-watering main event at Contenders 29 this weekend.

Ambitious promotion Contenders hold their last Norwich show this weekend before crossing the pond for an historic event in Florida in April – and they’re leaving the UK with a bang! Mark Heath previews Contenders 29, which boasts one of the best cards the region has ever seen.

WHAT, WHEN AND WHERE

Contenders 29 will be held at the Epic Studios in Norwich on Saturday night. There’s a 16 fight card which, as ever with Contenders, features a mix of MMA, K1 and boxing action, all held inside a UFC-sized cage. The first fight is set for 6.30 pm.

Simply put, the welterweight title clash between Jahreau Shepherd and Quinten De Vreught looks, on paper at least, like one of the best fights Contenders has ever seen. Shepherd (5-2) has won four in a row, all by stoppage, and has collected belts in other promotions in his last two fights. The ‘Nightmare’ is explosive, heavy-handed and exciting to watch. But in De Vreught (5-1), he faces a stern examination of his fighting credentials. The Norweigan ‘Hybrid-Viking’ fights out of the powerhouse ValHall Gym, also picked up a title in his last fight and is tight, technical and on a three-fight winning streak of his own. It’s a genuine 50/50 clash and has all the makings of a classic.

Contenders 29 will be streamed live around the world on MMA TV on the following link: https://www.mmatv.co.uk/mma/contenders-29/ 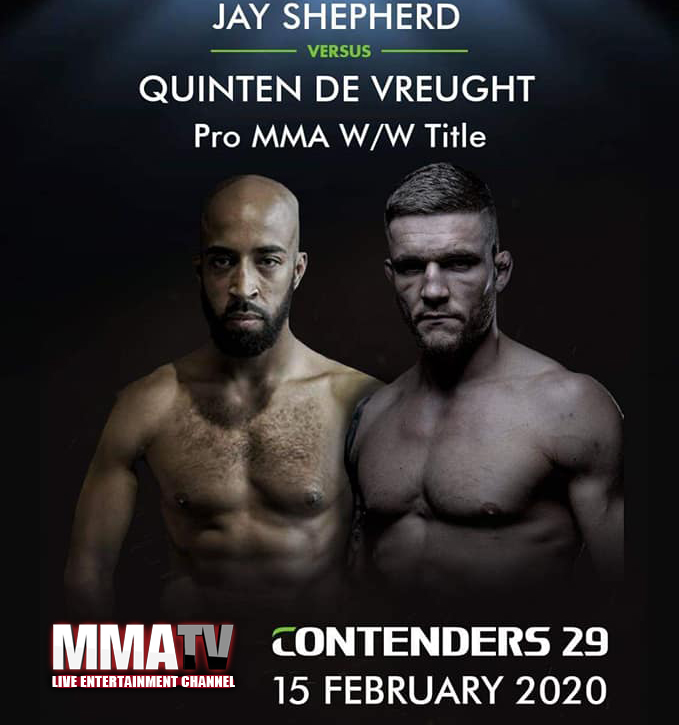